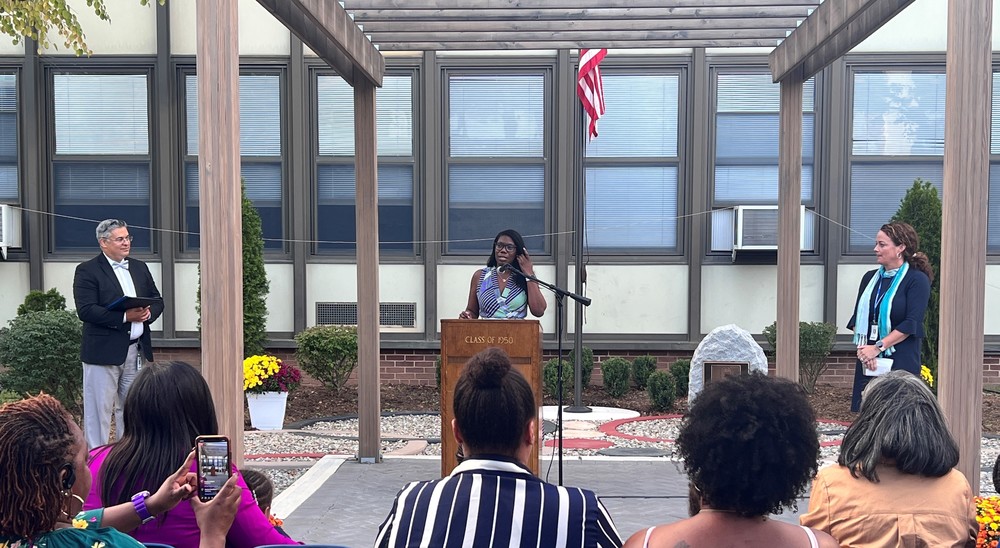 Dedicating WHS Courtyard in Honor of a Beloved Former Principal 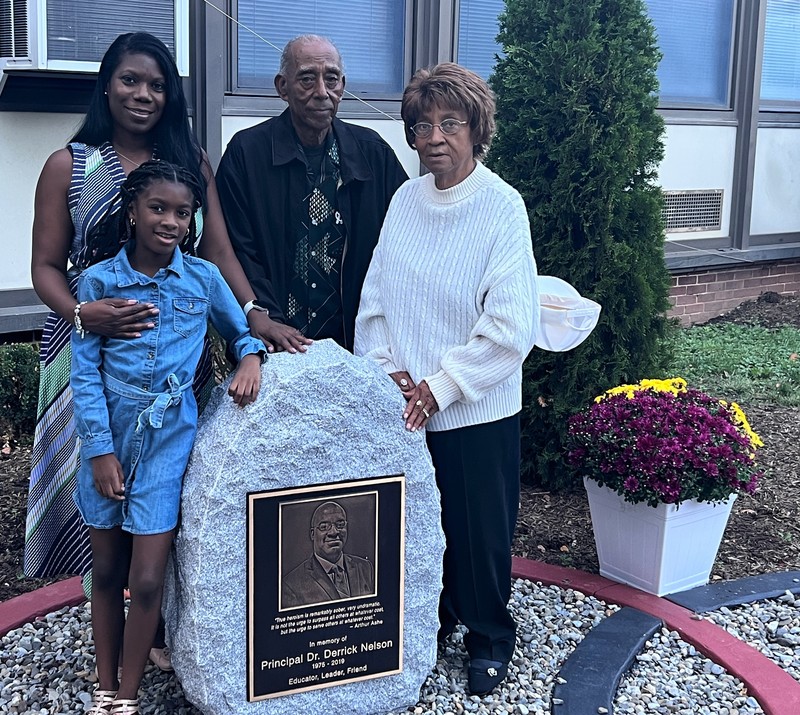 A dedication ceremony was held on September 20, 2022 for the Dr. Derrick Nelson Memorial Courtyard in memory of Westfield High School’s beloved former principal who died in 2019 from complications suffered during a procedure to donate stem cells to a boy in France he didn’t know.

Family, friends, and colleagues joined in the ceremony at Westfield High School, including Nelson’s fiance, Sheronda Braker, their daughter Morgan, his parents Willie and Juanita Nelson, current and former Westfield Public Schools superintendents Dr. Raymond González and Dr. Margaret Dolan, and many others.

González welcomed all those gathered for the dedication and noted that, having joined the Westfield Public School District a year ago, he “did not have the privilege or honor” to have known Nelson.

“It is clear that he was a remarkable person and a tremendous force… as an educator, a leader, an officer in the U.S. Army Reserve, a friend, and a family man,” said González.

“I’m really honored to be here today as we dedicate this long-awaited memorial garden,” said Braker.  “Dr. Nelson was a proud leader of Westfield High School and I might be a little biased in saying he did a phenomenal job as principal.”

In preparing her remarks, Braker said she thought about the meaning of the memorial garden including happiness, purity, creating peace between people, inclusion, and community.

“Dr. Nelson believed in inclusion and community.  Some of his work in Westfield at the high school and the middle school were examples of just that,” she said, citing a number of programs and initiatives created by Nelson.

The smiling image of Dr. Nelson adorns a memorial stone in the Remembrance Garden surrounded by a pergola, paver bricks, benches, decorative stone mulch, and the American flag flying above.  Adjacent is a paver brick plaza called “The Commons,” with an overhead shade sail stretching above comfortable picnic tables. The tables were provided through a generous donation from the Optimist Club of Westfield.

“It is wonderful to finally be standing before you sharing this beautiful space that is a fitting tribute to a man we admired, respected, loved and just wanted to be around,” said WHS principal Mary Asfendis.  “Thinking back to three years ago, there was much discussion about the best way to honor the memory of someone who meant so much to our school and community.”

Asfendis told the gathered guests that, “after many conversations with students, teachers, administrators, and parents, it felt right that renovating our courtyard would honor what Derrick brought to this school each day. It would be a student-focused space that would allow students to connect with one another, dedicate themselves to school work and have a little fun. This was also a place important to Derrick in his connection to the staff as he started the tradition of an annual staff barbeque that we continue each year in his memory.”

Gretchan Ohlig shared memories as both a parent whose children attended Westfield High School and as a former president of the Board of Education.

“When I was president of the Board, Derrick and I both participated on a panel about race relations in our schools and our community,” Ohlig recounted. “I was struck by Derrick’s honesty, his willingness to have difficult conversations, and his generosity in listening to others in sharing their experience. He created a safe environment to share and learn.”

WHS Student Body President Patrick Lanza noted that students have been enjoying the courtyard since last spring, “eating their lunches, swapping stories, bringing their laptops to work quietly, collaborating on a class project, or stealing a quiet moment to read a good book in a sunny spot.”

“We know that Dr. Nelson would have loved this space and the positive energy it brings to our school community,” Lanza added.

Dolan, who served as superintendent from 2007-2021, acknowledged the dedicated efforts that took place to renovate the courtyard.

“I hope all students will look at Derrick’s picture and see what I see,” Dolan said as she referenced the memorial stone.  “When I look at that picture of Dr. Nelson, I see a proud man, secure in his own skin, who faced each day with a broad smile, a smile and a personality big enough to reach all 2,000 students in the halls and in the courtyard of Westfield High School.”