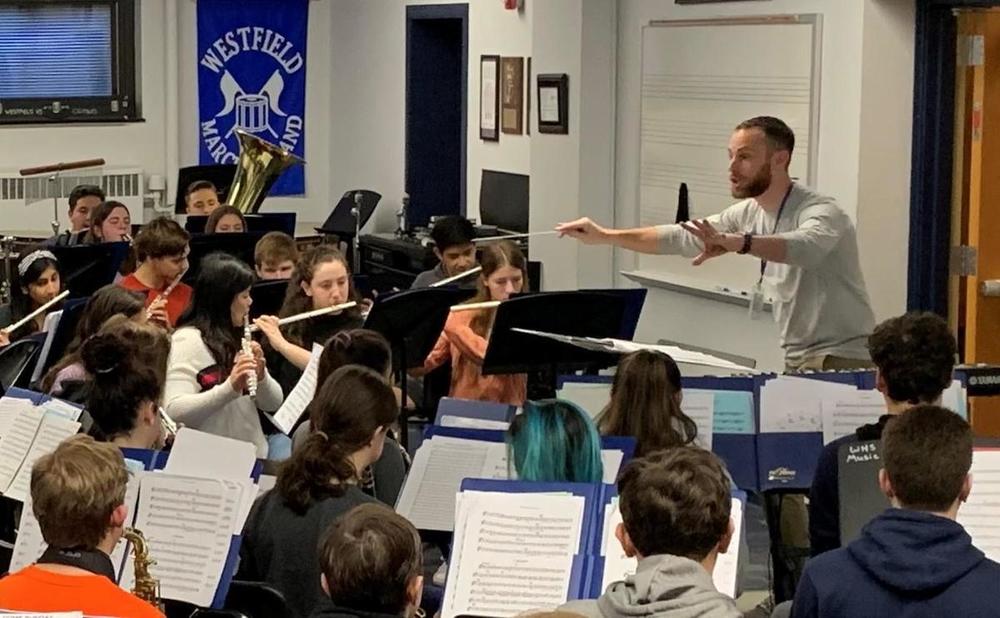 Westfield High School Band Director Christopher Vitale has been named to the 2022 “40 Under 40”, a music education advocacy program launched by Yamaha last year to “recognize outstanding music educators who are making a difference by growing and strengthening their music programs.”

Westfield High School Band Director Christopher Vitale has been named to the 2022 “40 Under 40”, a music education advocacy program launched by Yamaha last year to “recognize outstanding music educators who are making a difference by growing and strengthening their music programs.”

Vitale is among 40 music educators across the United States under the age of 40 who meet the program’s criteria of action, courage, creativity, and growth.

Yamaha says in a press release that “hundreds of nominations were received by students, parents, teachers, and local instrument dealers and mentors, highlighting the music educators impacting their community and students in a positive direction.”

Vitale, who is in his 10th year with Westfield Public Schools and 15th year as a high school band director, says he was “extremely surprised and honored” to receive the recognition.

“Though the award recognized me as an individual, I saw it more as a recognition of our band programs in Westfield,” he says.  “We are fortunate to have an amazing team of band directors, from elementary school through high school, that work together on a daily basis to make the bands in Westfield some of the best in New Jersey. I was so unbelievably proud that Westfield was recognized on a national stage for music educators all around the country to see."

WHS Band co-director Trevor Sindorf was among a number of people who wrote letters of recommendation in support of Vitale’s nomination.  In his letter, he notes that Vitale voluntarily hosts a well-attended book club before school for any student interested in strengthening their leadership skills.

“We can all agree that band directing is equal parts music education and life education,” Sindorf writes.  “Chris takes the 2nd assignment VERY seriously. He is invested in his students’ well-being far more than any band director I know.”

The Westfield High School Bands, under the direction of Vitale and Sindorf, are 3-time Band of America regional finalists, repeated New Jersey State Gala participants, and an invitee to the Music for All National Concert Band Festival.  Vitale also co-founded the New Jersey Marching Band Directors Association (NJMBDA) in 2020, with more than 70 high school bands joining the non-profit organization in its first year.

“For the last decade, Chris has established a band culture and community at Westfield High School that encourages students to strive for excellence while emphasizing both camaraderie and teamwork,” says Thomas Weber, Supervisor of K-12 Visual and Performing Arts. “Self-reflection and self-improvement have superseded competition. Despite the pandemic, the enrollment in our Concert Band, Symphonic Band, Wind Ensemble, Marching Band, Jazz Band and Winter Guard continue to be very strong due to all of his efforts.  In addition, his ensembles continue to earn top performance accolades year after year. Always professional and well respected by his colleagues, I can think of no one more deserving of this recognition.”

Vitale says that “through music, we can teach acceptance, empathy, communication, accountability, time management and teamwork. If I can teach that and foster a love and appreciation for music along the way, then I think I’m doing everything I set out to do as an educator.”