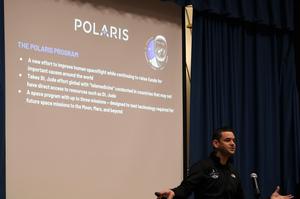 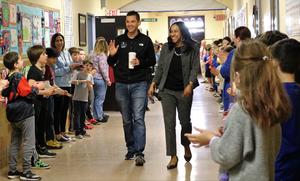 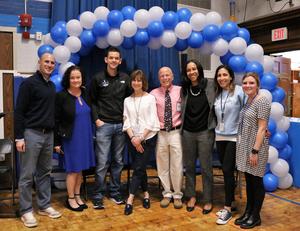 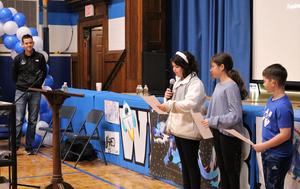 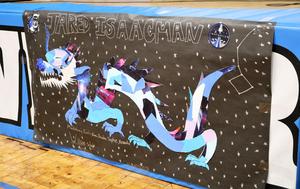 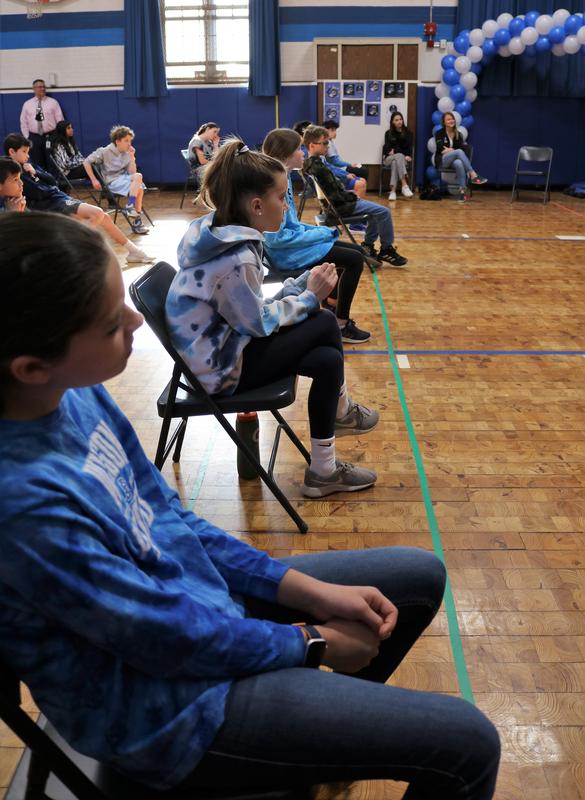 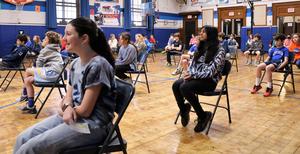 The excitement was palpable as Wilson 5th graders awaited the arrival of a famous alumnus on March 16. It was a visit for which the students had painstakingly prepared and, when billionaire and commercial space explorer Jared Isaacman walked into the gymnasium, awe-inspired smiles broke out.

The excitement was palpable as Wilson 5th graders awaited the arrival of a famous alumnus on March 16.  It was a visit for which the students had painstakingly prepared and, when billionaire and commercial space explorer Jared Isaacman walked into the gymnasium, awe-inspired smiles broke out.

“Today Jared Issacman is our honored guest here at Wilson School,” said Abigail Dewey, one of three 5th graders who, with principal Crystal Marsh, introduced Isaacman.  “Our fifth grade classes refer to him as ‘Commander Isaacman’ because that is how we came to know of him when learning about the SpaceX Inspiration 4 mission, the first crewed orbital mission with no professional astronauts on board.”

Isaacman, a civilian pilot who orbited the Earth last September as commander of the all-civilian crew of the SpaceX Crew Dragon capsule dubbed Resilience, spoke about that mission and shared his plans for future space exploration which includes three more space missions with a new four-member crew as part of a SpaceX program called Polaris.

“We’re going to go farther into space than humans have gone since we last walked on the Moon,” said Isaacman about the Polaris program which he says is “designed to test technology required for future space missions to the Moon, Mars, and beyond.”

During the first Polaris mission -- Polaris Dawn, scheduled to launch in November -- Isaacman said the crew will spend up to five days in space, conducting scientific experiments and testing a new spacesuit while on a spacewalk 310 miles above the Earth.  In a continued effort to raise awareness of St. Jude Children’s Research Hospital, the crew also plans to use SpaceX’s constellation of low Earth orbit communication satellites to conduct “telemedicine,” connecting pediatric patients in countries who may not have direct access to resources such as St. Jude.  Isaacman and the Inspiration 4 crew raised $240 million for St. Jude during their trip into space last fall.

The Polaris crew will continue scientific and in-space communications research on Mission 2.  And, as part of Polaris Mission 3, Isaacman plans to command “the first human spaceflight on Starship, the world’s first fully reusable transportation system designed to carry both crew and cargo to Earth orbit, the Moon, Mars and beyond.”

Last November, the Wilson 5th grade team of Coral Venturino, Katherine Brown, and Alexander Schmidt included Isaacman’s trip into space as part of the traditional science unit, with students writing fictional dispatches from the Moon and brainstorming ideas of how Isaacman has inspired them.  The 5th graders illustrated cards and wrote letters with questions about space for Isaacman.

Isaacman attended the Westfield Public Schools from Kindergarten through 6th grade and has said that his dreams of traveling to space began while looking at pictures of the space shuttle as a kindergartner at Wilson.  During his visit to his elementary alma mater, Isaacman answered questions from the students and was presented with a “key” to Wilson School, with Venturino expressing the hope that Isaacman will take the gift with him on his next mission into space.

In welcoming Isaacman at the beginning of the program, 5th grader Emilie Ancri noted that “Mr. Isaacman is a former Wilson School student who has more fans than just us fifth graders.”  The 5th graders thanked the SpaceX commander for taking the time to visit and share his experiences.

“We also want to thank him for all the good deeds he has done and the ways he makes an effort to give back in all areas of his life,” added 5th grader Eli Diamant.  “Thank you for being an amazing role model and inspiring us to be the best we can be now and in the future.”