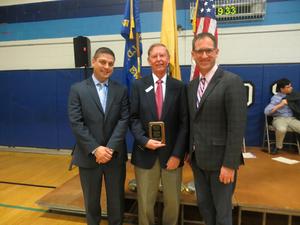 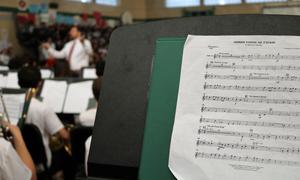 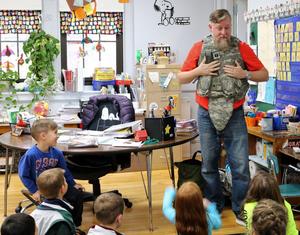 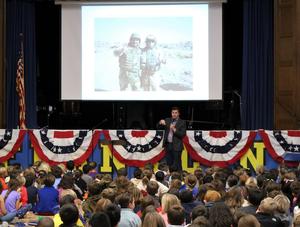 Students and staff across the Westfield Public School District honored the nation’s military veterans with assemblies and other commemorations to thank them for their service and sacrifice.

Students and staff across the Westfield Public School District honored the nation’s military veterans with assemblies and other commemorations to thank them for their service and sacrifice.

Colorful signs in red, white and blue adorned the gymnasium walls at Edison Intermediate School as the 8th grade band and chorus performed patriotic medleys at the school’s annual Veterans Day assembly.  A video presentation paid tribute to friends and relatives of students and staff who are veterans, including the late Westfield High School principal Dr. Derrick Nelson who served in the U.S. Army Reserves for more than 20 years.

“These are some of the most important years of your life,” Edison principal Matthew Bolton told the students.  “You are learning about how to make important decisions about the type of person you want to be.  And there are no better role models than our veterans.”

Edison keynote speaker and science teacher Christopher Wiley, a former member of the U.S. Army and Army National Guard, gave a brief history lesson on the military while encouraging students to reconnect with the nation’s veterans by creating care packages, conducting food drives and volunteering at homes for veterans.

Nearby, at McKinley School, first graders in April Krihak’s class welcomed Anthony DeFoe, who served in the U.S. Army for 12 years. DeFoe’s 1st grade son beamed with pride as his father spoke to the class.

“My family has a long history of military service,” said DeFoe whose grandfather served in the U.S. Navy during World War II while his father, an Army veteran, conducted artillery training during the Vietnam War.

“It feels like just a few years ago that I was sitting here,” said Joffe, a former Franklin student whose 2nd grade teacher 30 years ago was Dr. Eileen Cambria, now principal, and whose daughter currently attends 1st grade at Franklin.

Roosevelt Intermediate School held its 21st Annual Veterans Day Honor Assembly, honoring Helmuth Meditz, who served five years in the U.S. Army National Guard, with the “Heroes Among Us” award.  Students from various grade levels spoke about the history of Veterans Day and what it means to citizens while patriotic music was performed by the 8th grade band and chorus along with the Sharps & Flats choral group.